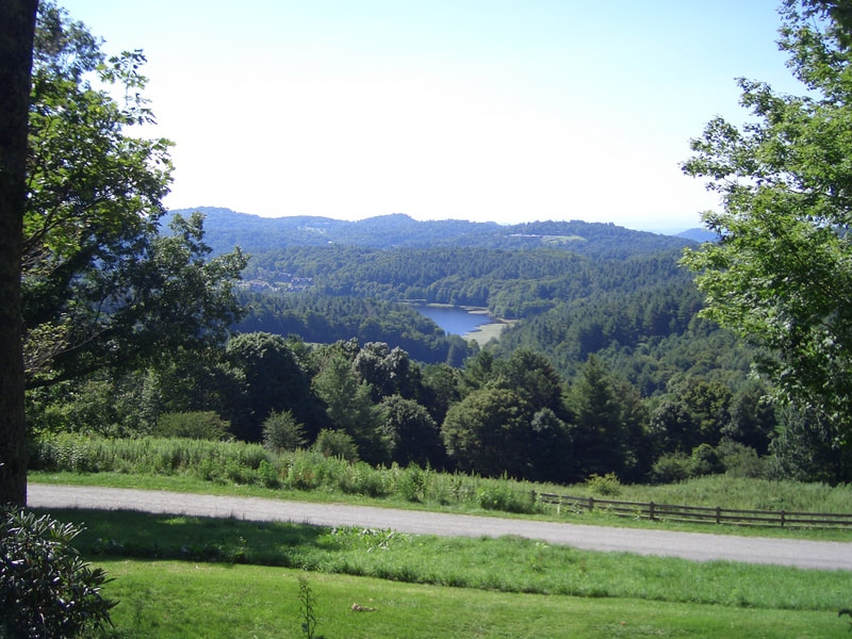 Bass Lake as seen from the Moses Cone Manor House.

There are many running trails easily reachable from the Blowing Rock Conference Center.  Moses Cone Park offers some of the closest and many consider it to have some of the best running trails in the USA.
The park is open to the public and thus there are some restrictions related to running on the park trails.  A group of runners can disturb non-runners on the trails.  Several years ago there were many complaints of groups of runners hogging the trails.  Non-runners were being forced to get off of the trails when these groups were approaching.  Those types of complaints were the basis of the current requirements that group runs must have a permit.

The park service regulations are not specific as the definition of a group.  Technically two people running together are a group, but two to four people will not usually cause a problem.  Just be sure that you always veer around walkers, don't make them alter their course for you.  On some of the trails you may meet horseback riders.  If they are heading toward you, move to the side of the trail and stop until they pass.  If you are overtaking horseback riders make them aware you are there and most of the time they will let you by, but avoid a confrontation and go the other way if necessary.

For training purposes most running team/groups  are divided into small groups based on levels of fitness.   These small groups would probably be good for any running in Moses Cone Park.  If your team is planning to run as a large group you will need to have a permit to do so.  Here is a link that will allow you to download an application for a permit.
Application for Permit
﻿
Applications for permits should be submitted 90 days prior to the event, for consideration and processing.

Mail applications to:
Blue Ridge Parkway
Attn: Permits Coordinator
199 Hemphill Knob Road
Asheville, NC 28803
While running in Moses Cone Park you will see signs which give distances to another point.  The distances may not agree with the distances provided on this site which were derived by using a Garmin GPS Watch.  Keep in mind that GPS watches are not exact but they are close.